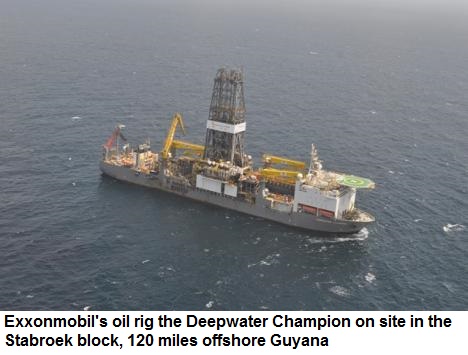 The United States Geological Survey ranks Guyana-Suriname as the world’s second-most prospective, underexplored offshore basin, with an estimated 13.6B bbl of oil and 32 tcf of natural gas yet to be discovered. In May 2015, ExxonMobil announced it made a significant oil discovery with the Liza-1 exploration well on the Stabroek block about 120 mi (193 km) offshore in the Guyana basin.  As of March 30, 2017 Exxon confirmed positive results of a 4th well offshore Guyana on the Stabroek Block bringing the total discovered reserves to around 1.4 billion oil equivalent barrels. Pumping should begin in 2020 with full blown production starting around 2023.

The Guyanese economy is at a critical time in its own industrial development given the burgeoning of its hydrocarbon sector. Analyst says that the discovery helps solidify the area offshore Guyana as an “exploration province” for at least the next fifty years and in light of Guyana’s small population (approximately 752,000), crude could make the country one of the world’s biggest oil producers on a per-capita basis.

Amidst the exuberance, some note that the Country is not ready for such influx of revenue and Guyana must be careful as not to negatively impact its economy.  In a country with no history of managing complex large scale industries except sugar and bauxite, the size and potential quick development timeline has civil society focused on the ways in which oil could boost the country’s economy or put it at risk.  If it is to successfully extract oil, Guyana needs to build the institutions and capacity to take advantage of the opportunity the discovery could provide.

The government faces a steep learning curve. Beyond fiscal revenues, Guyanese officials have to take advantage of the skills and technology associated with the complex oil space to build a more robust technocratic private sector and empower a new generation of highly skilled technocrats. Alongside the optimism that the oil discovery will be a major driver of the country’s development, Guyanese civil society are also acutely aware of the risks associated transitioning to oil production, particularly in a country already facing challenges with respect to measures of government effectiveness, rule of law, control of corruption, transparency and other governance indicators. One particular concern was how the oil sector could impact the country’s green growth agenda.  It is critical that civil society organizations across Guyana to build a critical mass of citizen understanding so they become part of the solution to how Guyana can take decisions which harness the resource for sustained prosperity.

The immediate tasks of citizens and civil society is to

Guyana is blessed.   Much needs to be done to assure broad distribution of benefits and resulting dynamism of this resource windfall.